While riding a bicycle is one of the most enjoyable things I do, I am aware that there are hazards out there that I have to keep alert to avoid.

Potholes are rough on a car’s suspension system, but the can both damage a bicycle wheel (the tire and / or the rim and spokes) if deep enough. They can also send you flying. That’s not a great prospect, especially if you are riding in traffic.

Other things to look out for are sand on the road, icy patches, debris, especially glass and metal shards, and water – a bicycle can hydroplane just like a car.

However, the thing you have to be most alert to is traffic. Sometimes it seems that motorcyclists and bike riders are invisible to drivers. They can pull out of a parking space or drive way right in front of you. They can turn a corner sharply crushing you between it and the curb. You can be riding in one direction and they can be coming the other direction and without signaling, turn a corner right in front of you. I’m sure there are many more incidents where a bike and rider become the victims of unaware drivers. Then, of course, there are those accidents caused by riders doing the wrong thing: zooming through stop signs, going down a One Way street the wrong way, or weaving in and out of cars that are driving down the street.

So, what happens if you do have a collision with a car? Well, a lot could. Scrapes and bruises are possible. Broken arms and legs can also result.

I found out that the type of bike you are riding can actually help determine how serious your injuries are. I had a run in with a car recently. Thankfully I was riding a small wheeled bike when I was hit. I survived with no injuries. What happened that saved me was that the frame of the bicycle was so small it allowed me to shoot my legs over the frame and land on top of the car. I’m sure it wasn’t as gracefully looking as it sounds. Had I been riding a standard bike with a bigger frame it would have been harder (or impossible) to get both of my legs over the frame quickly or at all. I would likely have been under the car instead of on top of it. If that had happened I’m not sure I would be here today to tell you the story.

Take a look at the picture below to see how much damage was done to the bike. Small wheels saved the day. I guess here I should mention that our Downtube folding bikes have small wheels.

Enjoy your ride, but be careful out there. 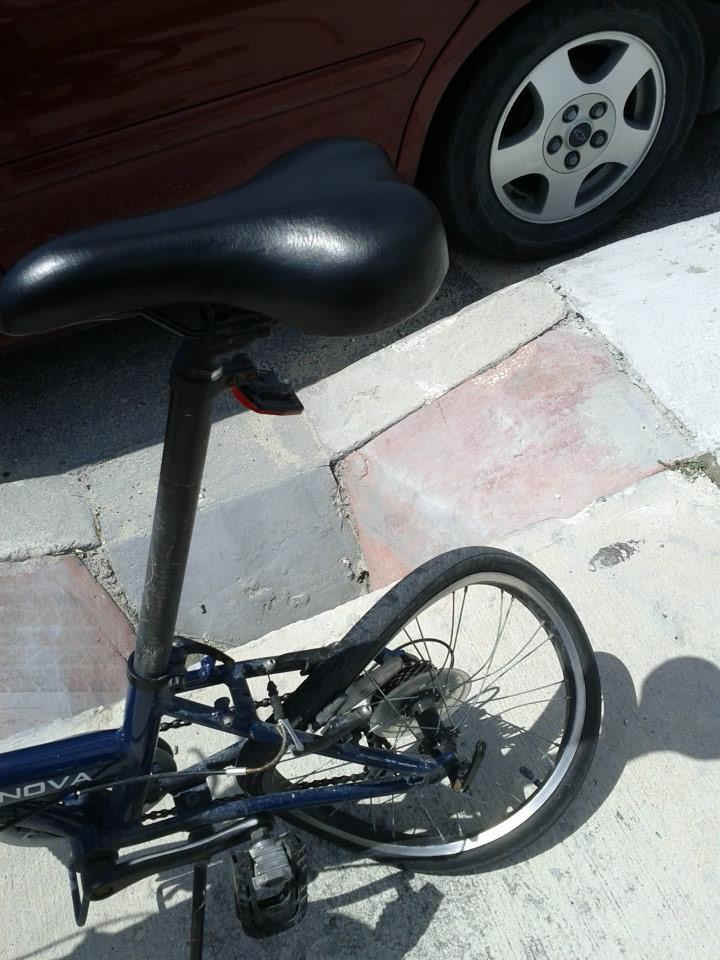