Getting the word out about how good a good folding bike is has been a challenge. Like I have said several times in my articles not all bikes are created equal. One of the things I like to hear is feedback from people who have tried and bought one of my Downtube bikes. Hey, who among us doesn’t like praise? However, when the media catches on to a product and does a story on it, it can be a big deal. That’s what happened when Peter Van Allen, a staff writer for the Philadelphia Business Journal, found out about us and wrote an article.

I found his approach to be an honest one. He didn’t just stick to my company or me; he gave some history of the bicycle industry and covered the difference between our sales strategy and major bicycle manufacturers.

I’ve posted both the article and the contents of it below.

Prof gets down with Downtube Bikes
BENSALEM – A company with a decade-long history of making foldable bicycles is finding high gasoline prices – and eBay – to be a tonic for sales growth.
Downtube Bikes, which was started in 1996 by mathematics professor Yan Lyansky, has benefited from higher gas prices and a recent surge in the sale of foldable bicycles – what some call “folders.” Lyansky expects sales to surge from last year’s $2 million.
But the 36-year-old mathematician, who has had a string of adjunct professorships – most recently, at East Carolina University – is in it because he loves bikes.
“I have a lot of bikes –all kinds of bikes, I don’t even know how many. Twenty maybe. I go everywhere on my bike. I don’t use a car,” Lyansky said. “I’m not into this for the money. I’m, like, whatever – I’m cool, I teach.”
Lyansky, who was born in Kiev, in what is now the Ukraine, immigrated with his family to Philadelphia. He earned his bachelor’s degree and doctorate at Temple University. His first teaching job was at Villanova University and, since then, he has been on an academic pilgrimage, of sorts, with stops at the University of the Virgin Islands, Temple, Penn State, Lafayette College, Furman University, Coker College and finally East Carolina.
While a graduate student, Lyansky did the first of two cross country bike trips. After a year of designing bikes, Lyansky started Downtube in 1996. Teaching stops allowed him to refine the product. For instance, the hilly, unpaved roads in the Virgin Islands were a good testing ground for gearing, brakes and tires and, according to the company’s promotional material, the “test bikes were brutalized for months in this difficult terrain.”
Folding bikes got a lift in the 1970s, in that era’s gas crunch but have taken off in recent years, driven by the commuter market and urban dwellers – and, again, by high gas prices. The theory was that you could combine a train or bus commute, which could more easily accommodate a folding bike. The bikes fold into three parts and take two or three minutes to be restored to full size.
A Philadelphia bike merchant, Mike McGettigan, owner of Trophy Bikes, is passionate enough about the bikes that he holds an annual convention in Philadelphia each June, the Annual Folder and Small Wheel Bike Fest, which this year included the Commerce Bank Manayunk Hill Climb, the Lincoln Mercury Time Trial and other events.
Much of the folding bike market is controlled by Dahon, a Los Angeles-based company founded in 1975 by David Hon, then a physicist at Hughes Aircraft Corp. Dahon, which has manufacturing operation in Asia and the Czech Republic, sells its bikes for between $380 and $2,300, through retail shops worldwide.
Lyansky has taken a somewhat different approach, hoping to target a more modest price range. The bikes are made to his specifications at a factory in China, incorporating components manufactured elsewhere in Asia. The bikes are shipped in finished condition, meaning they require no stateside assembly and can be reshipped in the same box to the customer.
Downtube has a Bensalem location and a tiny store in Ocracoke, N.C., near where Lyansky teaches during the school year.
The bikes have multiple gears and suspension systems, but a lower price tag than most folding bikes. They retail for $269 to $299, though Lyansky sell many of the bikes on eBay, meaning the prices – and his profit margin – can vary widely. Last year, the company sold 2,000 bikes.
Customers include boaters, pilots and owners of recreational vehicles – all of whom need a compact means of local transportation. Within those groups, many customers are retirees.
“Boaters are our best customers. Seniors like our bikes for the convenience,: he said. But, he added, “They’re too expensive for college students.”
To target retirees and other customers, Downtube advertises on CNN, the History Channel, the Golf Channel and American Movie Classics.
Yet what may set Lyansky apart is that, in addition to being chief designer and CEO, he also handles orders and warranty and answers the phone.
On an online bike site a lengthy chain of comments about Downtube bikes was followed by an unusual entry: “I am the designer of the Downtube Bike, my name is Yan Lyansky.”
Lyansky went on to address critics who said that the company could by hard to reach. Questions, he said, could be addressed to him by e-mail or on his cell phone, which he provided.
All in a day’s work for the professor.
“I have no employees,” he said. “I take all of the sales call and answer all of the e-mails. I process the orders.” 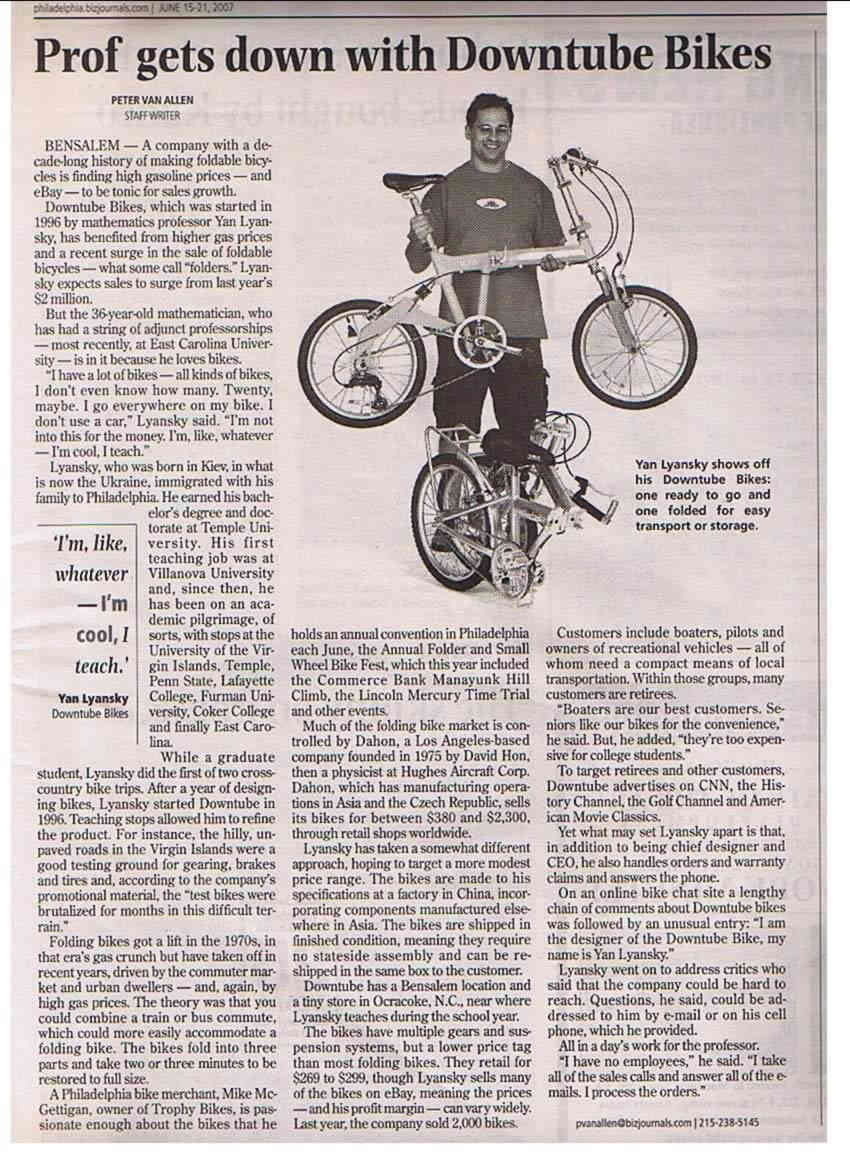