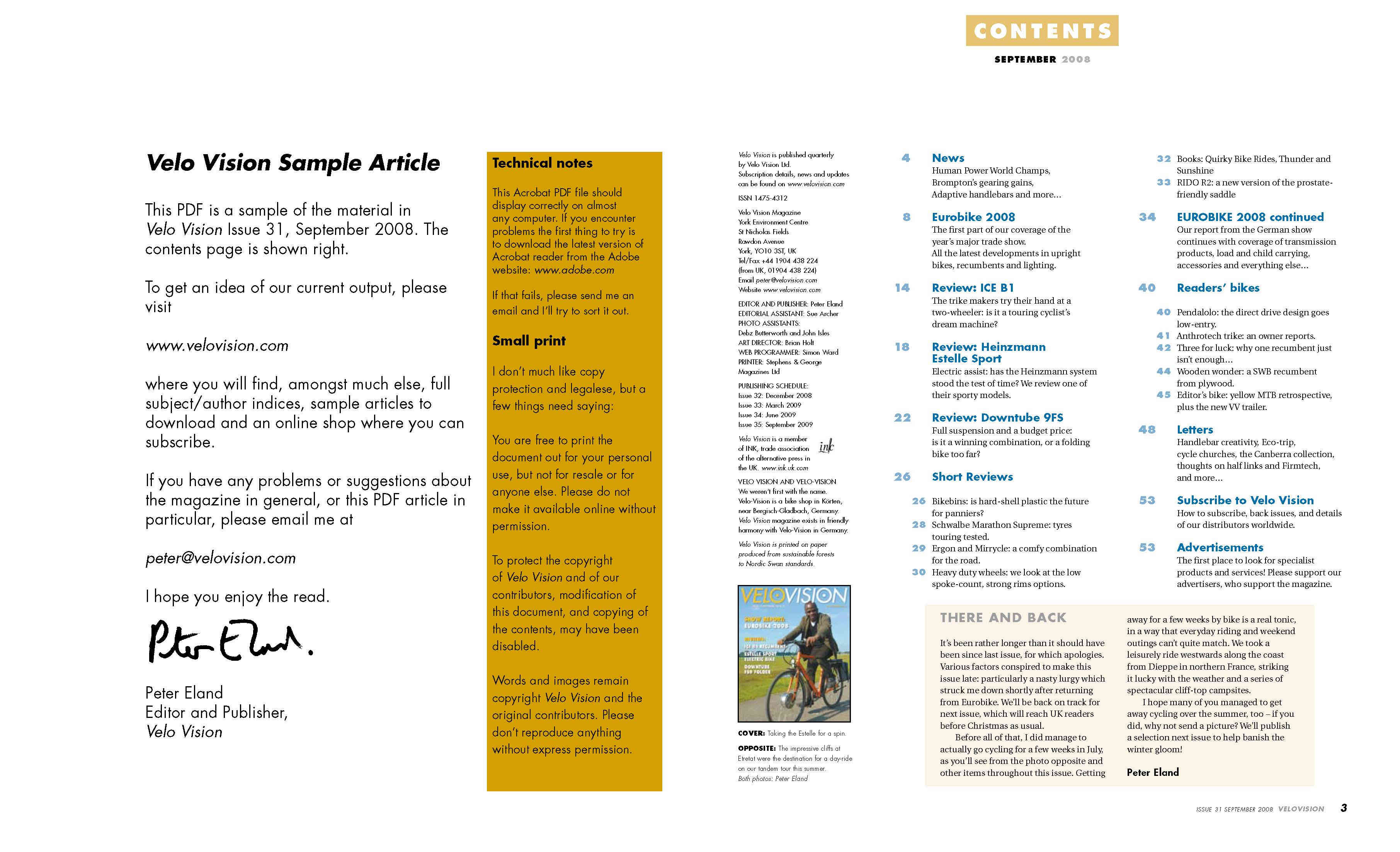 We hear reports about the Downtube,
a budget folder rather better than
the price might suggest. A report on
the Folding Society web site (www.
foldsoaorg uk) renewed my interest,
and areview bike was arranged via
the US manufacturer. After a spate
of rather expensive bike reviews
recently, a bit of affordability seemed
like a very good idea.
Downtube are an American
company, but have had a UK
distributor for some time, currently
VeloChocolate in Southampton.
Purchasers could until recently
snap up the last few UK stocks of
the 2007/ 8 model, very similar
to our review bike, for just £199
— which really did seem low, and
it was that which sparked much
interest. It's now sold out.
For the new 2008/9 model, prices have risen somewhat to
£359, to include airmail
sl1ipping to any address
in the UK, on a three/four
day service direct from
the States, as stocks won't
be held in the UK. Duty
and customs charges will
be included in the price.
so there won't be any
extras to pay US readers
will of course save on
both shipping and irnport tax, and the price over there is
currently $369 for the model we're
reviewing.

As well as the 9FS (full suspension,
nine-speed derailleur gearing) the
bike is available as the £399 8FH,
using the Sturmey-Archer 8-speed
hub gear. Both gearing options are
also available with front suspension
only, for £324 and £385 respectively.
They also have a smaller 16" -
wlleeled bike, the Mini, for £420,
again with the Sturmey 8-speed.
As the bikes are direct-shipped,
Downtube do recommend getting
them checked out by a bike shop
after assembly if you're not a
competent mecl1anic.
There's no specific luggage-
carrying system or other options
available for the PS9, but the
manufacturer's website does
show how some customers l1ave
modified it for touring.

FIRST IMPRESSIDNS
The Downtube is a.n angular sort
of bike, a.nd quite striking in our
chosen orange colour scheme
(white is also available). It certainly
doesn't look cheap, with a chunky
aluminium frame a.nd shiny alloy
comp onents. Perhaps this is what
sets it apart from the cheap folders
of the past — they would normally
have a steel frame with pressed steel
components, perhaps those nasty
ca.l.ip er brakes. None of that here.
There is perhaps something
about the styling which looks less
purposeful a.nd sporty than, for
example, the sup erﬁcia.l.ly simila.r
old-style Birdy fra.me. I think it may
be the way the stem just follows the
line of the steerer straight up, rather
than sloping forwards. But maybe
that's just me. Genera.l.ly the bike
drew admiring comments.


Starting with the frame, it's
welded with the typical fa.r east
neatness, just l.ike many frames on
more expensive bikes. Cables run
smoothly along the bottom of the
ma.in beam througl1 welded-on
guides, a.nd it's great to see a pair of
bottle cage bosses just in front of
the main hinge — omitted on many
folding bikes.
The ma.in hinge is a heavily-built
affair, a.nd while not as smoothly-
styled as those on many Dahons
or others, it is solid, with thick
a.l.loy plates forming each half. The
quick-release which holds it together
incorporates a safety lock: once it's
released, you also need to lift it up
to disengage the safety pin before
the bike will fold. When folded, a.n
a.l.loy loop under the bottom bracket
helps the bike stand up. It was ﬁtted
with a snap-on plastic ‘bash plate’ perhaps
packing for transport, but I left it on to preserve the paintwork.
just above the bottom bracket is
the pivot for the rear suspension» it
looks robust and of a large diameter.
The rear swingarm is again strongly
built out of welded aluminium.
On the right there's a replaceable
derailleur hanger (of which more
later) and on the left the frame l1as
disk brake mounts ready for a future
upgrade. There is one threaded hole
which looks like it might be useful
for ﬁtting mudguards, on the left-
side dropout, but nothing on the
right and nothing on the ‘bridge’. So
attaching arear mudguard might be
tricky without reaching for the drill
(although Downtube are working on
a set to be attached via P-clips).
Connecting swingarm to frame
is a simple coil sl1ock unit. The
preload is adjustable by the usual
threaded collar arrangement.

Seatpost and clamp are alloy units,
and a plain but effective quick-release
collar secu.res seat height. No little
luxuries here li.ke an engraved scale
on the seatp ost, but no big deal.
On to the front of the bike, and
the front wheel is supported by a
‘Swift’ suspension fork witl1 what
looks to be about 50 mm of travel.
Again, preload is adjustable, over
quite a wide range. As supplied it
was set ‘very soft’, which might suit
lighter riders. I tightened it up a bit,
until my static weight compressed
the system 20% or so. The fork looks
well made, with wiper seals around
the fork stanchions to keep dirt out
from the innards. But as with all
such designs, play will eventually
develop between the two parts. The
fork does have threaded holes for
mudguard mounting.
The front wheel is built around a
disk brake hub, and as the fork also