I don’t know about you, but when I was a kid I used to lay on my back and watch airplanes fly over head. I would also head down to the docks and see yachts and other boats chugging off to who knew where. I would also go down to the train station and watch the trains coming in and going out. I always wanted to know where these people were traveling to. Now that I’m an adult, I have to confess, I still get a kick out of watching boats, airplanes and trains. And I absolutely love traveling in them.

There are so many ways to get from here to there. One way I like to take a trip is by combining two methods of traveling. One of the two methods, as you can imagine, is to bring my bicycle with me. I’ve taken my bike on boats, planes, and trains as well as in automobiles. I’ve even seen people take a folding bike on another bicycle. Folding bikes are just so darned flexible.

There might be some restrictions on certain forms of travel, but I’ve never had a problem with taking a folding bike on a train. Once folded, the bike takes up about the same room as any piece of luggage that is stored in an open baggage shelf. In some instances the saddle might stick out and block a baggage compartment that has a lid. There are two solutions to that. One: remove the saddle and post and store it on top or beside the bike. Two: move the bike to the baggage shelves at the end of the car you are in. It’s as simple as that.

I’ve noticed that storing my folding bike in the baggage bin over my head has a side advantage. It inevitably causes one or more travelers in my car to strike up a conversation about this wonderfully flexible bike. They are amazed that I can go from it in riding position to completely folded in less than 15 seconds. Talking about my bike eventually moves to my other favorite topic – cycling. It’s amazing how many adults either ride now or are looking into riding a bicycle. When they see that I can take my bike wherever I want, their interest blossoms. Not everybody is a long distance rider like me, but I’ve discovered that there are a lot of people who work in the city and live in a suburb who loved the idea of riding from home to the station, bringing their bike onto a commuter train, riding to work, bringing the bike up to their office, riding it back to the station, and then home from their stop. The dire situation of global warming has really gotten people to think seriously about ways that they can lessen their personal carbon footprint. Maybe you should too!

Below are pictures of a Downtube mini in the overhead storage bin of a New Jersey Transit train. 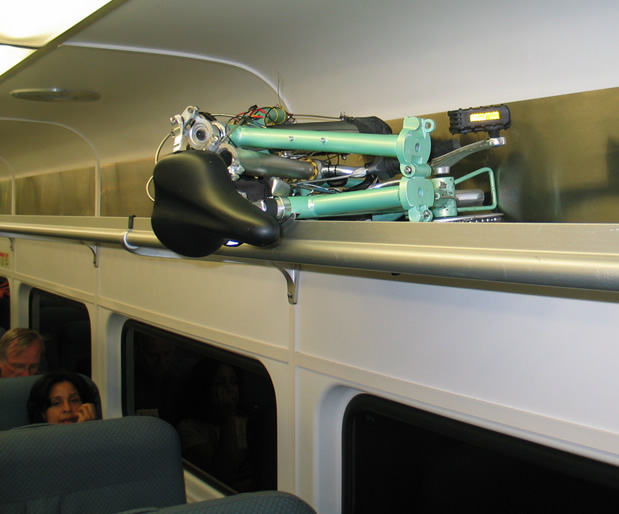 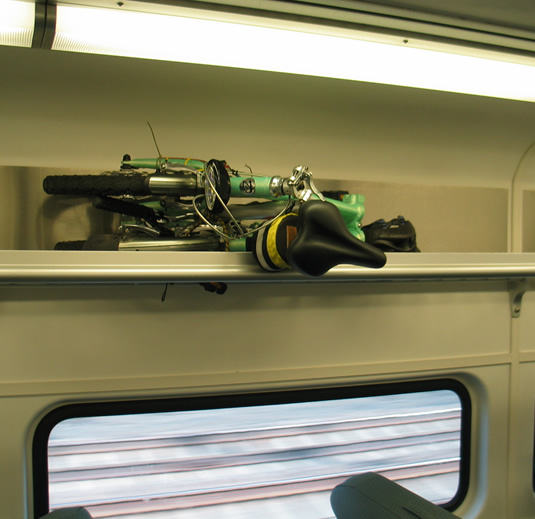